Absence would always win in a contest with presence.
– Rem Koolhaas [1]

The project of Rem Koolhaas for the new town hall of the Hague is an important statement about a city and about its architecture. Symbolically, it is not a monument; it is a building ‘in process,’ and this is the only appropriate symbolism for a major building in a social democracy. It is about today as tomorrow and not about concretising today as tomorrow’s yesterday. It is, above all, not an authorial building. It does not bear witness to the signature of the architect, but to the idea of the city. It should be built, and I urge its selection as the winner of the competition. [2]
– Peter Eisenman

The Hague City Hall was a project about the void. The competition in 1986 was also about saturating an absence, aiming at revitalising the historical heart of The Hague whose public facilities were disconnected as an archipelago. The City Hall was a real-estate venture initiated by alderman Adri Duivesteijn, who proposed to converge the offices and the central library within one building at the Spui. Duivesteijn launched a competition for five Dutch developers associated with renowned architects: Richard Meier, OMA, Van den Broek & Bakema, Helmut Jahn, Cabinet Saubot et Julien. OMA actually replaced Stirling & Wilson, entering the competition six weeks before the deadline, with a team composed by Koolhaas, Willem Jan Neutelings, Götz Keller, Birgit Kochta, Marty Kohn, Luc Reuse, Ron Steiner, and Garciella Torre. In December, the jury led by Aldo van Eyck awarded the OMA plan. Between January and May 1987, a debate in Dutch newspapers followed, evaluating the relevance of the project. Geert Bekaert strenuously supported Koolhaas’ project, launching a petition signed by personalities such as Herman Hertzberger, Frits van Dongen, Hans van Beek, Pi de Bruin and Peter Eisenman. Nevertheless, the council commissioned Meier the construction of a grandiose public atrium, adapted to the social-democratic representative ambitions of the municipality. OMA had proposed something different: an austere three-dimensional frame to be filled with program, people, and activities.

The intention was to create an architecture sufficiently indeterminate to accommodate endless variation, a building able to program instability and organise flexibility by means of architectonic eloquence. The attempt was to dismantle the Dutch real-estate protocols, based on a 7.20m structural grid combining a 1.8m standard workplace module and a 5.40m average room dimension with three parking lots. The City Hall was among the first OMA projects developed in collaboration with Cecil Balmond. A 44-page telefax from Balmond, dated 28th November 1986 and in the archives of OMA at the NAi, provides an in-depth account on the development of clerical space. A challenge was the feasibility study to adopt a steel structure rather than a traditional concrete frame, allowing lighter foundations, rapid construction and a standardized structure.

According to Koolhaas, since the Renaissance, the crux of the European clerical layout had been the private cell, whose daylight parameters condemned the organisation to a corridor with rooms on both sides. Koolhaas had tried to transform the office layout in previous projects, such as the Lintas office (1984) and the Morgan Bank (1985). The result would be a sort of ‘flying carpet’: an empty surface with functions floating like islands, technical cores as a series of pavilions, desks, and furniture as free-standing objects. The challenge was a problem of ‘depth,’ the European translation of a question of Manhattanism: how to use the abstraction of business to absorb and make productive the metropolitan congestion? Business was indifferent to spatial distribution, and it required an elementary and easily reproducible frame to accommodate the fluctuations of the market and the rearrangements of the firm: a typical plan.

Architecture was thus depleted of unnecessary elements and reduced to a vacant floor, a technical core, a minimum of columns, and an envelope: a plan that could work for any tenant and host whatever content. With the rise of cognitive economy and information technologies, the nature of clerical work changed, moving towards dynamic and personal interactions made of informal communications and physical contacts, shared spaces and constant movements, loosening the office organisation but also integrating recreative and cultural activities, once separated from the working routine.

In this sense, the project for the City Hall was an experiment with the typical plan at a monumental scale. The first step was to demonstrate the inefficiency of the Dutch protocols, collapsing the required 90.000 square meters of office space plus the 15.000 of special program within a slab 14.40m wide stretched along the 220 meters of the plot and vertically repeated 30 times. This configuration would have been very unpractical, demanding vast amounts of wall surface, lacking interior spaces and displaying all the facilities on the facade: staircases, elevators, restrooms, ducts, archives, meeting rooms, etc. The next step was to elaborate an ‘efficiency catalogue’ to test configurations based on the 14.40m module but increasing the complexity of the layout and calculating the ratios between internal space, daylight area, and skin surface. By overlapping, sliding, doubling or halving typologies, it was possible to formulate combinations that widened the corridor distribution towards semi open-plan and office landscape layouts without losing flexibility, and still complying with Dutch regulations.

The site was divided in two: a triangular sunken plaza on the south with shops and pavilions, and a rectangular plot on the north, hosting the programmatic mass. The plot was sliced into three parallel strips of 14.40m, horizontally articulated through functional clusters, and vertically layered in a series of 23 floors of diminishing complexity, to dilute the congestion of the plinth through the typical tower plans.
All the municipal facilities, administrative departments, and informative desks were located along the western side, culminating in the sphere of the council room, suspended above the public hall as a reversed Captive Globe fed by plateaux of political decisions. Towards the Spui the building confronted the city with blind elevations of concrete panels and a cantilevering triangular balcony on the 6th floor. A bridge over a zen garden and a ramp to the sunken plaza connected the street with the main lobby, the high glazed court and a ‘wedding balcony’ towards the square and the Dance Theatre. Cabinets and offices were arranged along the Kalvermarkt on the north side coated in stone, concentrated around vertical cores connected on the third level by an internal weaving promenade equipped with shops, a post-office, flower and newsstands, a hairdresser, a travel agency, and reception rooms. The east side of the plinth was dedicated to the archive; the towers contained commercial offices, retail services, and private enterprises. Along the southern side, coated with a stainless steel curtain-wall, the library was organised over three floors, served by a cascade of escalators and accessible from the square. The functions of the library – catalogue, magazines, video bar, exhibition spaces – were flanked by a restaurant, cafes, a pub and an ‘amusement palace’ with a Leonidovian swimming-pool.

Architecture suddenly became simple, clear and quantifiable like a histogram. Each slice seemed to be cut off from an endless extrusion as if industrially produced in series, whereas its volumetric articulation was supported by a rhythmical sequence of technical cores and typical plans. The result was a ‘super-colossal shining bar,’ a suprematist architekton plunged in the heart of the city, whose hybrid character marked the point of intersection between the urban fabric and its shameless commercial developments of the 70s and 80s as a phallic wedge. Reflecting the surroundings via a curtain wall of various materials and densities, the project was a montage of banal architectures, a catalogue of generic office plans used in recent city expansions.

In this sense, The Hague City Hall by OMA was paradigmatic for what Frederic Jameson defined as the capitalist strives for delirious equivalence: the effort to produce a generic architecture made of empty extensions with a minimum supporting structure. [3] The rising importance of speculation and rent values moved capitalism towards higher forms of finance economy. It also deprived architecture of its concrete qualities, undermining its representative power and limiting its contextual relations with the homogeneity of an isometric space and the austerity of a reflecting envelope. The result was a skin and bone architecture that eluded traditional relations with the city because it responded to a different economical accumulation. Space turned into fictitious capital: an abstraction of heavy consistency yet constantly proliferating through volatile operations that transformed architecture into an issue of management. The more fictitious capital increased, the more speculation expanded in consumption of land, the more architecture became a machine for leasing square meters and making a profit, replacing stability with incubators of congestion.

By juxtaposing a series of layouts adopted to generate square meters — atrium, tower plus annex, L-shape, overlapping slab, T-shape, slab with middle core, slab with corner core, twin-towers — OMA’s project reproduced this speculative logic, assembled as an isometric repetition of land values contained within apparently different but structurally similar forms. Flaunting the financial strategies which reshaped the city centre during the 70s and the 80s, OMA’s City Hall could certainly not win the competition. It was not only an appropriate ‘architectural tribute to the Dutch metropolis’ (as Stanislaus von Moos wrote) [4] but also a provocative manifesto about the submission of politics to neoliberal economy, the ambiguity of representative democracy, and the neutralisation of architecture to a real-estate apparatus.

2 Message written by Peter Eisenman for the petition to the city council, dated 5th May 1987. OMAR 0819, Netherlands Architecture Institute.

3 Frederic Jameson, "The Brick and the Balloon: Architecture, Idealism and Land Speculation," in The Cultural Turn. Selected Writings on the Postmodern (London: Verso, 1998), 186. 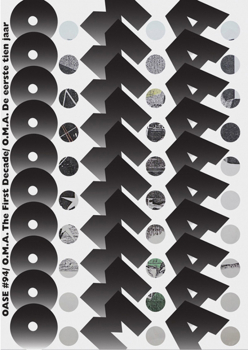 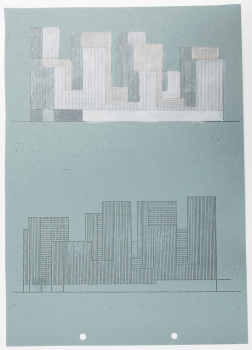 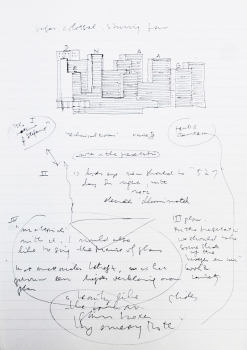 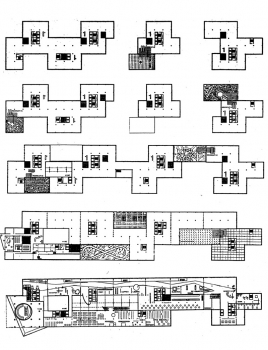